skip to main | skip to sidebar

In politics, the enemy is your friend 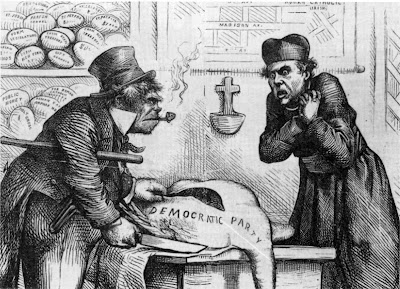 There are, in general, three ways to compete for the majority of the votes:

The northern Democratic Party has by and large pursued the first. The northern Republican Party used to pursue the second--with Civil War memorials and Lincoln Day speaches and how the sainted martyr Abraham had saved in the Union and it was our duty to his memory to carry forward his banner.

Starting early in the twentieth century, however the Republican Party has been increasingly pursuing the third...

In the real world, (2) and (3) are actually the same thing and (1) is not possible without the other two. The only way to convince people that your political party is, fundamentally, who they are is to also make it clear that those people -- those people over there, you know who I'm talking about -- are not. They're your enemies, they want to do you harm and if you vote for the other ticket, you're voting for them.

Take the northern Republican Party of yore that Brad admires (and not wholly without reason). Of course they held Civil War memorials and made Lincoln Day speeches. But then in the peroration, they would always remind their audience once more of the perfidy of that party, the party of Rum, Romanism and Rebellion. (See the Thomas Nast cartoon above - the priest and the Irishman carving up the goose that laid the Democrats' golden eggs.)

What about the Northern Democratic Party of yore, supposedly a follower of (1)? Tom Frank once wrote about Harry Truman's Turnip Day speech, which he delivered during the 1948 campaign:

Truman was explicit: “[T]he Democratic Party is the people’s party, and the Republican Party is the party of special interest, and it always has been and always will be.” He reveled in what Mr. Klein would call “class war,” calling a Republican tax cut a “rich man’s tax bill” that “helps the rich and sticks a knife into the back of the poor” and describing politics as a contest between the “common everyday man” and the “favored classes,” the “privileged few.” Even more astonishingly, Truman went on to talk policy in some detail, with special emphasis on Mr. Klein’s hated “jobs, health-care, and blah-blah-blah”: He called for the construction of public housing, an increase in the minimum wage, expansion of Social Security, a national health-care program and the repeal of the Taft-Hartley Act. And this sort of high-octane oratory propelled Truman on to win the election in a historic upset.

Note that in this speech, Truman clinches (1) through a studied combination of (2) and (3). And if you read the speeches of Robert Wagner or FDR you'll find the same thing.

And today's Democratic Party? Over the past few decades, aided by a capacious social vision and and soaring oratorical command, the Democrats have perfected a form of political appeal more stirring and irresistible to the democratic masses than any ever devised. I'd summarize it this way: "This election isn't about ideology. It's about competence."
Posted by The Scanner at 3:37 PM

I like "better management of failed policies", but that's me.

I agree that we need to make the case for liberalism more effectively -- and that Democratic politicians for the most part, rather than doing that, are out there focus grouping and polling and trying to find stuff to say that people will already agree with.

The Scanner
Once, before blogs, I did this type of thing for a living...